I'm a member of the Coast Guard Art Program ,COGAP, and each year submit work for consideration for the Coast Guard art collection. Jurying is done in New York at the Salmgundi Art Club. Last year I had a pen & ink drawing juried into the collection and 2 weeks ago I was notified that my painting, "Vertical Insertion", was juried into this years collection. The painting is off a Coast Guard team being pulled back into a helicopter during traning exercises in Texas.
The painting was done from a reference photo taken by a Coast Guard member. I liked the photo because of the gorgeous background sky and clouds. The main subject, the helicopter and men hanging on the cable were something I had never done in a painting so I figured it was time to give something like that a try.
I started with a good sketch of the scene I had cropped out of the photo since the entire picture taken by the Coast Guard member wasn't needed. 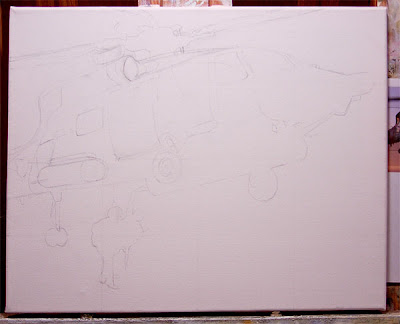 After I was happy with the sketch I then blocked in my colors for the sky and clouds and then began to blend all of that with a fan brush until it looked the way I wanted. I painted around the helcopter and men on the line below. Sorry for the glare on these early photos...too busy painting to worry about lighting. 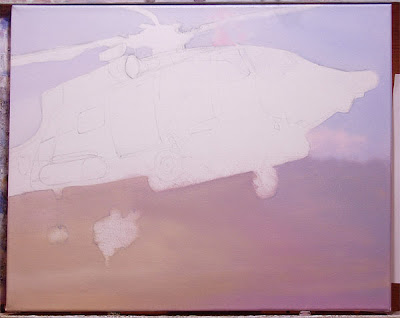 I then began to paint in my darks and the grey areas of the helicopter. My oranges would be blended into these colors in areas. 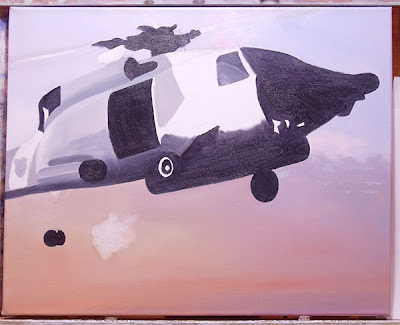 After that I began to paint in the rest of the helicopter paying attention to my edges. The Coast Guard wants work the resembles their equipment accurately but there is room to not have hard edges and I could have gone softer there if I chose. The back wheels looked a little low so I will paint over them and move them higher later. 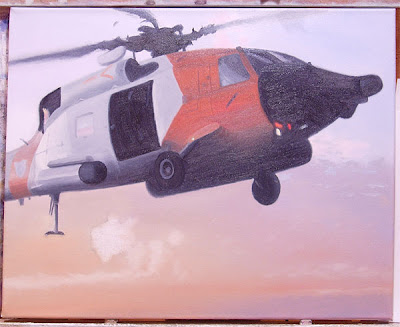 Here you can see those wheels painted out and waiting for the new wheels to be painted in. You can see the area left unpainted for the men on the cable...I left them last so I could adjust their position with where they should be under the winch since most of my outlined drawing of them was painted over by the sky blending. After the helicopter was done they were added last and this is the finished result..... 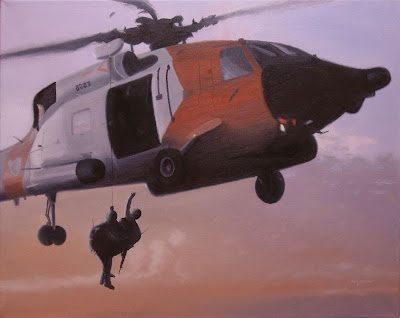 The blurred motion look to the blades was created by painting in some of my dark mix and waiting for that paint to set up to a tacky state. Then I used a dry brush to feather the paint into what you see here. This scene was in late afteroon light...almost twilight which gave that sky such wonderful colors.

Once notified by the Coast Guard of the painting being accepted into the collection I then varnished the painting and when dry sent it off to Virginia. It will be framed by them and displayed at the Collection Reception at the Salmagundi Art Club later this year...June I think. I'm welcome to fly to New York for the Reception but I still can't afford to do that. They will present those of us who had work juried into the collection with a really cool looking certificate and photo of the painting in this huge book-type binder along with a letter of thanks. It's really an honor to be included into the collection. The work is donated to the Coast Guard and will be available for display at various Coast Guard installations or other government locations. It's all pretty cool!

I decided to paint a desert scene since I really like the desert and don't get to see it as often as I wish. In Pasadena a drive to the Mojave desert was just an hours trip over the San Gabriel mountains on Angeles Crest Highway. Places like Palmdale, Mojave, Four Corners, Phelan, California City and Pinion Pines were fun to drive up to. The fun of exploring the high desert, which is what we called it, is almost impossible now due to the God awful housing development that has taken place since the early 80's. The ruination of the desert I call it.


Back in the early days of the desert there were a lot of guest ranches out here and at one time agriculture. My Dad rented a houseboat on the Colordo river and we had to travl across the Mojave in our blue 1963 Chevy Biscayne station wagon complete with desert water bag hung on the front of the radiator grill just in case. Crossing te high desert still could be a major deal then. Nowadays these same roads are dotted with McDonalds, In-N-Out Burger and Taco Bell...not to mention the occasional Outlet stores for that last minute super deal we are all looking for in tennis shows or jeans. If you grew up watching Death Valley Days it is really hard to appreciate driving across Pearblossom highway and seeing the trash and furniture left scattered along the roadside. Enjoy what you can of the Mojave before developers convince even more of the masses to move to affordable country desert living. 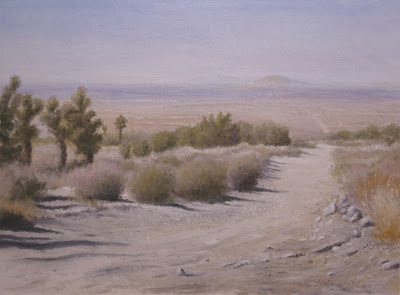 "Floor of the Mojave"

Did this painting to practice my cloud work. I love the clouds we get here in the valley and Winter brings spectacular clouds for reference material. These clouds were from a storm that brought rain about a month ago and I waited to get them on film as soon as the sorm began to break up.
Some clouds are just so spectacular that I won't paint them because they will look contrived...like trying to build this monster sky painting with unbelievable clouds....some skies here have totally looked unbelievable. I have them on film but no one would believe it if I painted them. I usually tend to tone my clouds down when painting them but they would still be hard to imagine to most viewers. 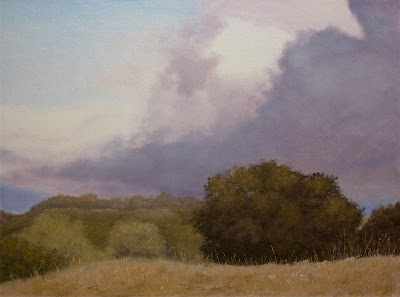