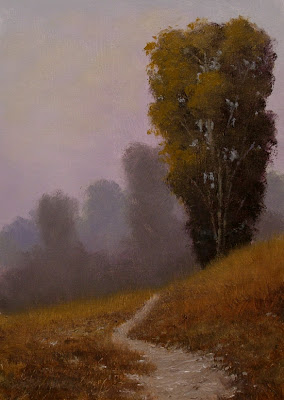 "Along Old Friends"
5" X 7" Oil on Panel
Another alla prima painting that I did after returning from a meeting at the Wildling Museum where we discussed plans for next Novembers Artist Studio Tour. I was preparing a canvas for a larger painting and while waiting for the gesso to dry decided to paint another small work. I painted this one to try out different sky colors and played with the distant treeline colors too. I really like this combination of colors and might just use this for the larger painting I was about to begin.
After painting in the grass I wiped out the trail using a brush and turpentine. Normally I get it really clean but this time I left it sort of stained looking with some thicker areas of "stain" and it gave the trail this sort of grungy smeared look but the colors it left were very cool....I almost didn't want to paint in the trail colors over it. I might have spent more time trying to keep that look but this is a small one that really will be used as a ref for the larger piece...I can mess with it there since there will be more room anyway. 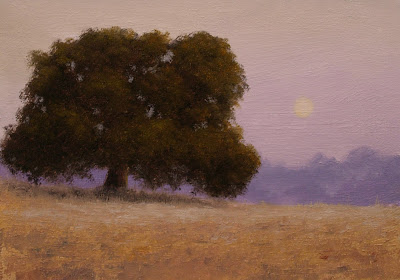 "Foxen Canyon Moonrise"
5" X 7" Oil on Panel
A little painting done last night to brush up on oak trees...something I seem to not paint as much as I should. I like the way oaks grow and spread out and I love their color. Granville Redmond painted the best oak trees I have ever seen when he was painting his Barbizon school paintings after returning from France and before he began his impressionist work. I'd like to get just close to his ability to paint an oak tree because that would be something to behold. Besides...living in California you have an endless supply of oaks for subject matter.
Posted by Ron Guthrie at 11:06 AM No comments:

I dropped off my painting for the show in Nipomo yesterday at noon. I basically set aside the day to get this done so I took my painting gear with me. I looked for a spot along the groves of eucalyptus trees near the Dana Adobe and started painting. I don't know why it is but I have had the really bad knack of painting in midday sun the last 3 or 4 times out. Not a good thing to do despite it always being a convenient time since you aren't getting up early or waiting to chase the late afternoon sun, haha, and yes I mean chase that light if you're not too careful.
Here is a shot of the setup with the view. Not a bad setup out there...just backed the truck up under some shade and sat on the tailgate...that shade lasted about 20 minutes. It would have been perfect had I brought something to eat but I'm always running late and managed to only grab an iced tea out of the fridge when leaving. 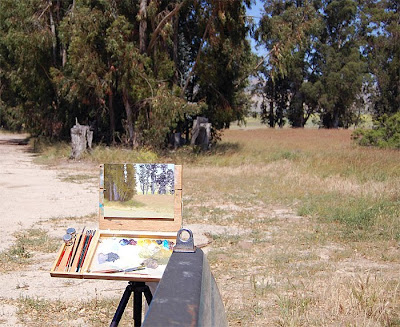 I wanted to keep the background trees seperated a bit from the foreground trees on the left so I gave them less leaves and a lot more "air". Here is a shot as the painting was nearing the end.... 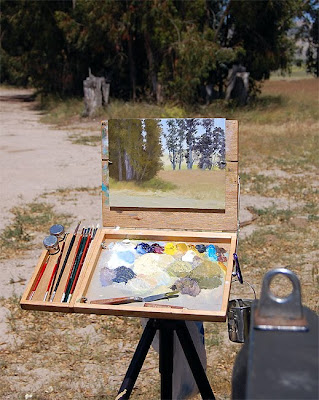 I have been painting some ocean scenes using this pochade box so I had a lot more piles of paint on there than were needed for painting eucs in nipomo. This is a 9"X12" panel with just gesso on Masonite so the paint was setting up pretty good out there in the sun and nice little breeze that came up. I finished up out there with my stomach growling and headed for Jack In The Box!...saved by the Ultimate Cheeseburger. Here is the finished painting.... 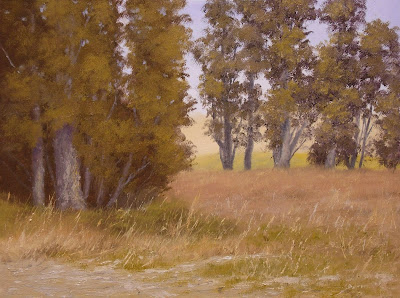 It's not a bad little painting and will make a great sketch for a larger studio version. I look at it now and see things I like and things that I'd change...in the studio is the place to really get a good look at what you did out there, digest what works and decide on strategies when doing more PA work...it's an ever evolving lesson on learning to paint better inside and outside. Was a fun day up there.
Posted by Ron Guthrie at 12:29 AM 2 comments: 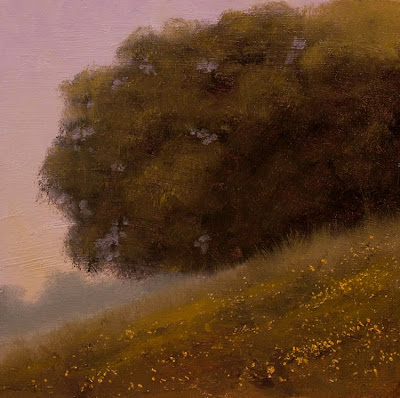 Trying out varying sky colors for evening scenes. Fun painting to do and took a record time as an Alla Prima painting. I think I did this in about a half an hour tops....not bad for alla prima results. Masonite is always such a great help when doing alla prima work...the paint really tacks up quick as the oils settle into the gesso and board. I use Copal for my painting medium so that also helps.

Anyway....I have gotten into the show up in Nipomo with my Nipomo Vista work posted below here somewhere. This is their first show like this so I'm wondering what it will be like....sounds more like a fair with art added in. I think in the long run it is a good deal because it will make some money to help with maintaining the Dana Adobe there...that's a part of California history and since the CA government chooses to waste tax payers money at great expense the Dana Adobe could use all the help it can get. The show is this Sunday but I have to run up there to drop off the painting on Saturday. I was just up there with the painting for jurying too this last Saturday...3 trips. They need to turn the jurying to "Online" jurying since this wastes time and gas running up there 3 times. I hope they get this dialed in down the line. So far though the staff working the show seem really good....like I said, it's their first time putting on this show. Hope it's a fun one.
Posted by Ron Guthrie at 11:11 AM 4 comments: 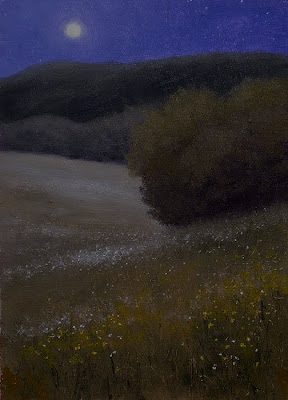 SOLD
After painting the recent Cachuma hills painting I decided to make a nocturne out of the same view. This was a nice personal challenge to take a day scene and convert it to a nocturne. Values and colors change drastically at night so it is up to the artist to create those changes to pull off a believable night scene. It helps if you've painted a few nocturnes to remember how the light available at night causes these changes.
Handling the flowers was an interesting part of this because I think night would really have these so dark you really wouldn't see much of them unless the moon was really high and full. With a low moon they'd be much darker but I wanted to keep them a good part of the scene and lightened them some. This way I could push their perspective in the scene but still retain an overall nocturne scene. I think this one came out pretty good and am pretty happy with the results.

I spent this last weekend over at Catalina Island painting wildflowers. I went over with painting buddy Rich Gallego. We left early saturday morning and came back sunday night. Fast trip but lots of fun. The first painting was done near the airport on the island. On the way up there we saw two heards of buffalo and as we were setting up to paint another one was checking us out from a nearby hillside. Here is my first attempt.... 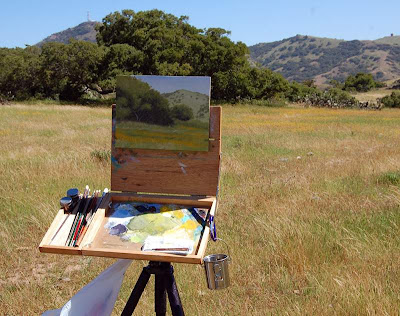 After completing his first painting Rich came by to do a study of a cactus plant nearby. He did this pretty fast and I got some reference photos for future work. There is a lot of cactus on the island and finding a good clump of it to make a good painting would be a breeze any time of year.

The meadow we painted at was about a half mile from the airport and yes you can still order a buffalo burger there. 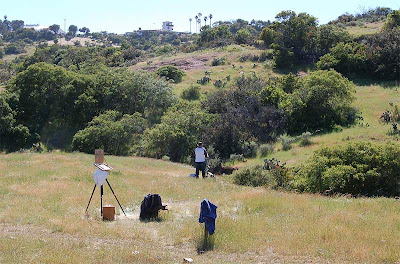 Rich and his cactus study..... 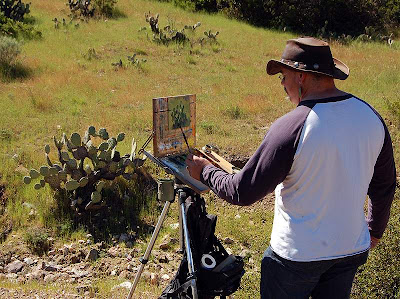 There were some small golden flowers that were scattered throughout the meadow and they really stood out. I'm not sure what they are called but we have them up here in Solvang too so I'm sure they are fairly common wildflowers. We did see some lupine flowers on the way up to the airport but not enough to write home about. 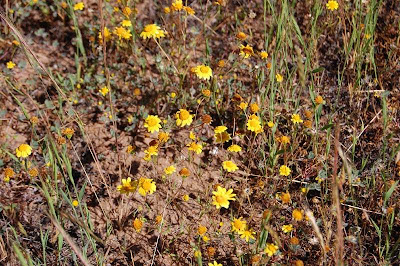 After painting a good time in the sun I opted to paint in the shade. I have an umbrella that clamps on to my rig but you have to carry that thing, hahaha. Besides, the winds came up in the afternoon so that makes an umbrella into a really good sail...a tree works better if you can find one with a view. I ended up painting two from this location while Rich was down by the harbor painting the pier with it's famous green buildings. 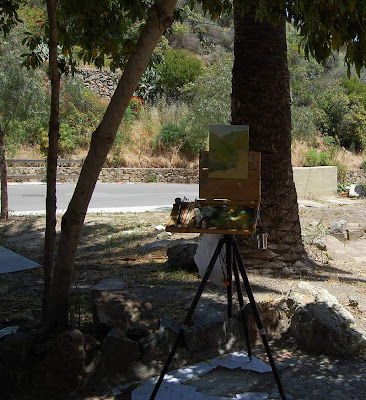 Here's Rich and the pier. He came away with a really good one here but my favorite of his was the cactus study he did on Saturday. I've been wanting to do a cactus painting lately and planned on doing one right after my first one but he beat me to it. Besides....I didn't have to put up with 9000 questions and the ever popular "are you an artist?" like Rich did on the beach. 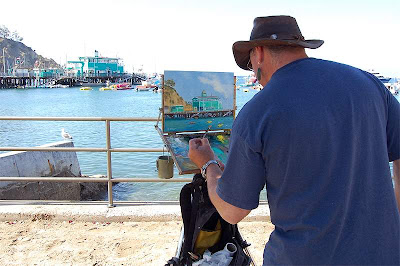 Overall we had a great time. Rich has a funny sense of humor so we did a lot of laughing. We both did lots of painting and lots of hiking too...my feet and his knees can attest to that. The wildflowers were a little slim but there if you look. I think March or April would have been the primo time for them and that's good too because it's the off-season over there...less tourists and cheaper hotel rates (actually, the room we were at was only $80 for the weekend so we got a good deal there.) Funny, Rich talked to a watercolorist shortly before we left and he told him of a great spot just west of Avalon harbor but you have to crawl on the rocks by the water to get there....had we only known we would have hiked over there but we had a boat to catch....and a nice cushy seat on a boat was all too welcome by Sunday night.

Don't ever ask a guy in an airport tower where you can find wildflowers. You might as well be asking him where is the best place to paint on Mars. The guy knew planes and how to remind us to be on time for the bus to get back to town....or it's a long walk. It didn't take us long to find some to paint though....but there is nothing like the feeling of asking a stupid question even when it's justified, hahahaha. Another fun adventure painting......plus excellent tacos at Petes on Sumner St.