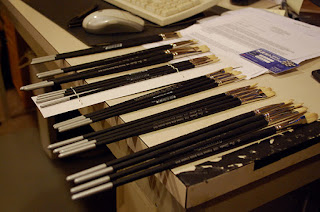 Wow, received a sale catalogue from Jerry's Artarama not long ago and they had a great sale on hog hair filberts and flats. That's what I use, mostly filberts but flats are great for straight lines when doing boats, roof eaves, etc. 14 brushes for $35...not bad at all. They are cheapo brushes but with some quality in them. I don't use expensive brand name brushes since I'm pretty hard on them....so many swishes in the turpentine when cleaning them and they've had it. I've used a good brush cleaner and conditioner before but you know I don't really like spending time fixing brushes, I'd rather paint with them until they've had it and then I either keep them in a seperate can until I need that beat up brush for wild natural grasses that go every which way.
I'm not real big on buying the most expensive stuff for art since art really isn't about what you create it with....it's about what you sign your name to....not what you used to sign it. I know....lots of artists can give you all kinds of details about why they buy expensive stuff. Seems to me they are just going to pass that on to somebody and guess who that is?
Impressionist painters used to paint on wood scrapped from old packing crates when times were tough money wise...you and I can't afford one of those paintings so that's the lesson...it's not about what you use to make a painting, it's about how well that painting looks to the person who buys it or just stands there and enjoys looking at it. My French Companion I built from scrap pieces of wood in my garage and two brass plated piano hinges bought at Home Depot cost me about $6 to make and the paint for some great paintings have been mixed right there....and it still works fine and will be around loooong after I'm dead and gone and hopefully in the hands of some other painter. 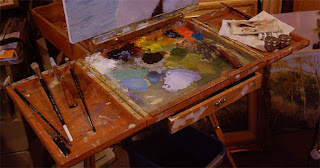 Hotter and My Neighbor Jim

Well, it's been getting warmer now that summer is here. I hate the heat because in the afternoons there will be no painting in the studio because it gets too hot in here. One day while I was working on the bluff painting my neighbor Jim came by. Jim is 92 now and a WW2 vet. We can both talk each others ear off. If I was going to remember Jim for anything it would be not for his part in WW2 but more for his love of nature. Jim grew up in Santa Barbara and as a kid he would ride his bike to the bottom of the mountains and then thumb a ride from anyone headed up the mountains so he could hike miles to a campsite. From there he'd watch for animals, hike more, fish and just enjoy being a kid up in the mountains surrounded by nature. Age keeps him from doing all of these things now but he can name any peak I point out here in the valley. He can describe in depth details about any area around here. Jim, more than me or anyone else I know around here, is who God created this part of California for.

So Jim comes by and tells me that before he dies, which I suppose at 92 he thinks about, he wants to paint a life sized California condor....they are very big birds. He wants me to give him advice for either stretching the canvas or just making a panel...at that size I suggest stretching canvas over a frame that he plans to build. I suggest paints, acylics, and other details for him and off he goes. A week goes by and Jim calls to tell me he'd like me to come see his setup before he stretches the canvas. Linda and I go by and he's got a frame the size of a garage door! No I'm not exaggerating. Needless to say Linda, Jim and I all tackled stretching that canvas which was actually a paint drop cloth he bought at the hardware store since he couldn't afford or find regular canvas in that size. It took us about and hour to do it. I loaned JIm my canvas pliers but we didn't use that, just pulled on it with both hands. We had my electric stapler with lots of extra staples so thank god for that!

Right now Jim is painting that baby. Why? Because Jim has a love of nature and wants to share his love of the California condor with anyone who can't miss running into a life sized painting of a condor....that is a big painting and if I can get some shots of it when he's done I will post them. Did I mention Jim has only sketched when he was a kid growing up....never painted at all! I'm proud of his drive. Helping Jim with his goal has been the most fun in art this year for me. He needed the help and I enjoyed sharing whatever it is I could share. Fun stuff!
Posted by Ron Guthrie at 4:38 PM No comments: 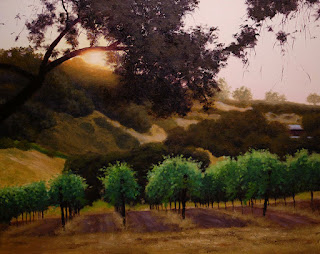 Another scene of the Firestone Vineyard at sunset. The Firestone vineyard  is acres and acres of vines rolling across the Foxen canyon with a spattering of oaks. In the center is their victorian house that is either just an office or the actual living quarters for family or foreman...not sure because I've only been there once but that was for a concert they had with David Crosby and Neil Young years ago.....yeah, it was a good one and I got to meet David Crosby and the rest of his band backstage. If you ever come out to the Santa Ynez valley you need to spend a day just crusing up Foxen Canyon. The canyon is beautiful and filled with dozens and dozens of vineyards. If you like wine tasting you can spend the whole day driving up through the canyon.
I think maybe just a few small tweaks and I'll call this one done. Having fun teaching myself to paint light this way.
Posted by Ron Guthrie at 6:15 PM No comments:

I was looking through eBay today and stumbled across a painting by Calvin Liang. Funny, the ad said "From China" but that couldn't be right....but it was. The painting was Calvin Liangs but according to the auction it was painted by Liu Jian...an "original oil painting" it says. WTF? I don't know if Calvin Liang knows about his work being sold on eBay by a company from China without his signature and the auction description claiming it is the painting of Liu Jian instead....that would piss me off. 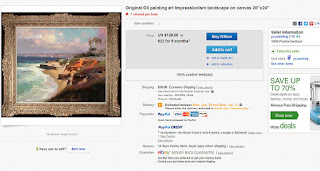 Naturally I poked around after that trying to find out just how bad Chinese art forgery has become. According to people posting on eBay forums it has ruined the eBay we knew it as 10 or 15 years ago. I used to sell art prints on there all the time...made great money but things changed in the mid 2000's. After that it was almost impossible to get people to buy on there. I've sold a few paintings there, small ones when money was tight. That worked at first but the last few times I've tried that it didn't. The economy??? Forgery causing the loss of trusted eBayers??? I'm not sure but I would believe Chinese forgery hasn't helped eBay but for the life of me I can't understand a company like eBay who puts up with it. It's pretty blatant and I'm sure they've been warned by the people getting burned by it. Then I read an article about how hard it is to go after the forgers in China....http://www.cbsnews.com/news/booming-chinese-art-forging-business-hurts-us-artists/ ....
I guess what it comes down to is people want to make money...keep their corporation going and no complaining, ripped off, whiney artist is going to mess that up. It's sad to think America has become a country that doesn't protect their own people from getting screwed by foreign countries. Heck, if we allow foreigners to cut the heads off of our people why would it bother them that some artist is getting ripped off for a painting or two....or 10,000.
When I was in the service in Germany we used to brag to each other about how awesome America was compared to other countries. I wouldn't brag at all nowadays. I can't believe that America would still allow trading to go on with China at all. Imagine all of the industry that would come back to the US if we made our own steel, built our own ships, made our own shoes and clothing. You know, we used to do that stuff and it was more expensive but most of us had jobs to afford it. Of course....I'm no expert, I'm an artist.