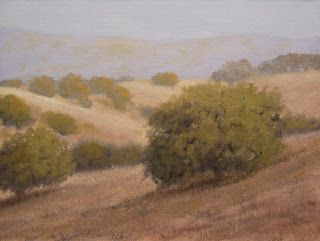 "Chamberlin Ranch Oaks"
6" X 8" Oil on Panel
This small painting was painted about a year ago. I recently had this in the Silent auction during the Los Olivos Quick Draw event and it sold to a really nice woman from Hermosa Beach, CA. I had wanted to try and paint another version of the small painting to push the colors and add more detail in the foreground. Before the Quick Draw I grabbed a 16"X20" canvas that had a Marine painting on it and decided to paint over it.
Normally when painting over an old painting I'd sand off any lumps of old paint and then wipe it with a mixture of yellow ochre or indian yellow and turpintine first. This gives you a more even tone to paint over and fresh paint for the new paint to stick to. Instead I just wiped it down with a very diluted mix of turpentine and copal and once it was tacky I painted away without a tinted ground. This forced me to paint thicker since I tend to paint thin. 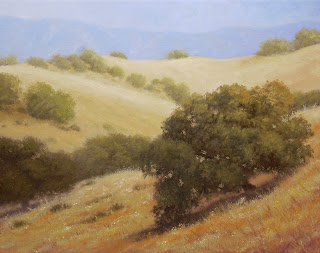 "Oaks At Chamberlin Ranch"
16"X20" Oil on Canvas
There were slight changes to the newer painting since I wasn't trying to copy the original but just use it as a reference. I got most of the painting in before delivering the small painting on Thursday night to the auction. After the weekend event was over I came back to the new painting and finished it off. I really pushed the colors and detail which was the point of it all. I like the changes and added color/detail of the new painting. It is a good thing to try doing these with ones own work. There is a normal pressure with every painting as you try to make it a good painting of course but in doing a second painting I found that pressure was not there. I already had a good painting so there was a lot more freedom to experiment and make changes here regardless of the outcome...if something didn't work I could always just wipe it down or wipe the whole painting down and start over. Things went well on this one so I'm happy with the effort. 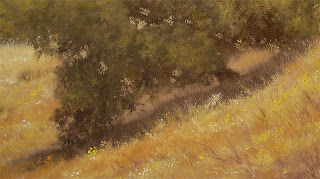 A detail of the tree and foreground....
Posted by Ron Guthrie at 8:29 PM 4 comments:

The 25th Annual Los Olivos Quick Draw has come and gone. A pre-show of the participating artist's work on Friday night, Saturday morning''s Quick Draw followed up by the show reception in the afternoon that went until 8pm had me and all of the other artists ready for bed early on Saturday night. It was a good show.

The pre-show on Friday had pretty low attendance but I think we all knew that would happen considering the current economy. Actually, the economy has effected everything and that's too bad. Artists arrive hoping for the best and soon you see signs of frustration happening. You work hard to prepare for shows, paint your best, spend money on good frames, pay for hotels, gas for the car, get dressed up and then go through traffic, maybe take time off work if you have a job and then go to an art show where few show people up and those who do aren't buying. Hoping for better times.
There is only one thing good that comes out of a slow show, you have the time to talk to your painter friends. I visited with my old friends and made new ones so that was a good part of it...a great part. Finally met Joe Mancuso, super nice guy, and spoke again with Joe Milazzo as well as the other great artists there.
Arrived back at home around 9 and then stayed up till 2 doing last minute things before the Quick Draw on Saturday. 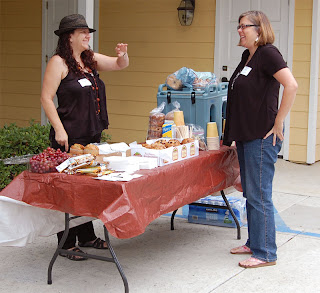 Holly and Stacey from the Wildling Art Museum who worked so hard to put on a great show.
Up at 6am to pack up my gear, and arrived at the show just after 8am. Parked a block away and lugged my gear to the booth I would be in. I took 4 items...my french easel, my french companion, my bag of this and that and the frame I would use. Many of the artists seemed to bring enough stuff to fill up a studio. I don't get that. I wouldn't have taken the french companion if it didn't make things so much easier but it does so I took it. The bag of goodies was my turpentine can, paper towels, hand cleaner and a cloth towel and camera....had to have that stuff....and the frame was needed to frame the painting for the auction.

One very cool thing happened as I was setting up. I was walking past Ted Goerschner and Marilyn Simandle's area and Ted was standing there with a big grin on his face watching me heading back to my car. I've been in a show with Ted and he's one of the artists in the gallery that represents my work but I had actually never met him. I walked up said good morning and introduced myself. I had read and been told that Ted has no problem speaking his mind. That can intimidate most artists...it intimidated me. In 10 seconds I found Ted to be one of the nicest artists I had ever met. He was so casual and easy to speak with. We spoke for a few minutes, he introduced me to Marilyn and I felt great. Ted's never seen my work (maybe thank God for that! hahaha) but I have a very deep respect for him. He's a legend to all of us here in he valley, has taught and improved probably millions of artists with his workshops and books as well as been an inspiration to countless artists out there....he's a Big Gun in the art world to me. 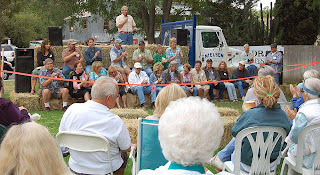 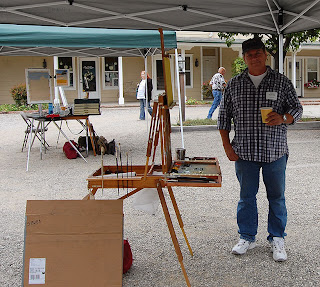 About 5 minutes before the start..have coffee and ready to roll.
We set up then went across the street be announced to the slow arriving public...it looked dismal at best because hardly anyone was there but by the time they finished making the introductions it was packed and more people where still arriving. I wasn't nervous at all until we went to our booths and started painting....then with people talking behind you, taking pictures, asking questions the heat was on and at times I'd stop to settle down. It can get very nerve racking with an audience only 2 feet away watching your every move. All the while you are also racing the clock and battling doing a fast painting or a fast and good painting. Big difference. 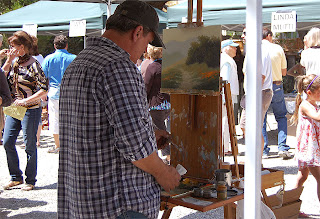 Getting close to the finish. I had Linda mill around snapping shots. 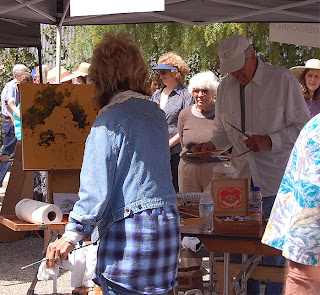 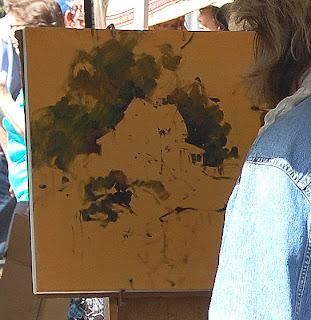 A closer shot at Marylin's painting
At one time they called out a 15 minute warning and I didn't hear what they had said. I stopped and looked towards the announcer with I'm sure the look of horror on my face because the crowd watching me started laughing and assuring me I still had 15 minutes. Whew!
When the bell rang I was happy with the finish, framed that puppy and off it went. The night before I wired the frame for hanging, taped a business card to it and an artist bio. All I needed to do was slide in the wet painting, staple the brads in with my frame gun and was good to go.

The Auction begins...that's a good looking crowd !
The auction went well...below the normal prices but again, the economy raises it's ugly head. Everyone sold their paintings to the very large crowd of bidders. We also had a silent auction going on at the same time and I sold the smaller painting I had there to a woman from Manhattan Beach. You've got to love the people who show up to enjoy your work and efforts and you have to really love the ones who support you by bidding on the work. Face it, sales make the wheels turn and even if the prices were below market prices we all still sold and that's a gift....everyone wins. In that respect this was a successful show and I've been to many, many unsuccessful shows on the road of art. 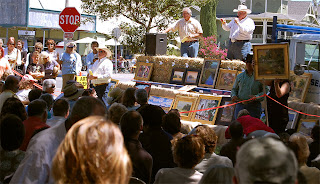 bid bid bid....
One thing I did was forget to take a finished picture of the final painting...in too much of a hurry to frame and deliver the painting to the auction area. All in all....it was a great day.

Create a painting in 1 hour...you bet I can!
It's only 4 days till the Los Olivos 25th Annual Quick Draw happens on Saturday Morning. The events actually start on Friday, Aug 19 when there will be a Quick Draw Art Preview with a Wine and Desert Reception. Collectors can see and buy art from their favorite artists the night before the Quick Draw at St. Marks In The Valley Church. This will happen at 7 - 8:30 PM. You may purchase advance tickets for $20. and they will be $25. at the door. To purchase tickets in advance online click here.

On Saturday, Aug 20th, the event begins at 10AM and will last until 6PM. There will be the Quick Draw followed by the live auction for the paintings as well as a Silent Auction in the Grange Hall. There will also be the additional art at St Marks too. A reception will happen at St. Marks at 2-4 PM. You can download a brochure here.  I will be painting in the Quick Draw event and look forward to seeing and talking to you Friday at St Marks as well as during the Saturday events. Please come by and have some fun !! 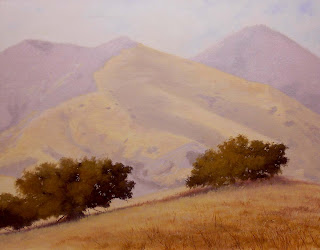 Grass Mountain
22" X 28" Oil on Canvas
Looking to the north side of the valley we live in a familiar site is Grass Mountain. This mountain is easily recognized due to the year round grasses the cover it's south side. In Winter there is a nice green side to it and in Summer great tones of gold, ochre and yellow blaze in the sun. My attempt here was to go for the afternoon light as it warms the foreground oaks and grasses and push the atmosphere moving across the valley back to Grass mountain. Below is a detail on one of the foreground oaks... 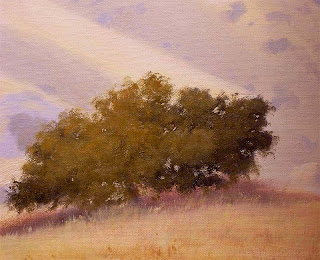