Here is a short work-in-progress (12"x16") that allows the progression of this painting to be seen to completion. It is another painting looking up at the mountains above Eaton Canyon.

In this part I had blocked my colors working from top down. There is only color changes on the mountains and the greens and darks for the foreground foliage are a reddish undertone. This area will be in shadow. 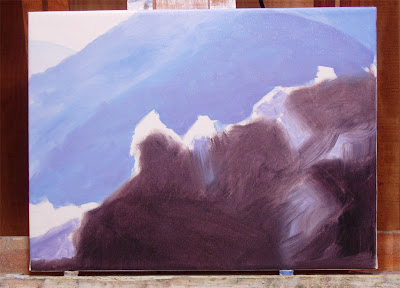 I've now begun to add my lighter greens to the foreground here. I've also begun to shape the foreground too. I left to tops highlighted areas of the trees unpainted in the last stage so I wouldn't be painting wet on wet there. The mountains near the tree area was painted with a mix of paint and turpentine so it would tack up faster so I could paint the green highlights over the tacky paint. Still, it is better to leave your highlight areas unpainted as much as possible. 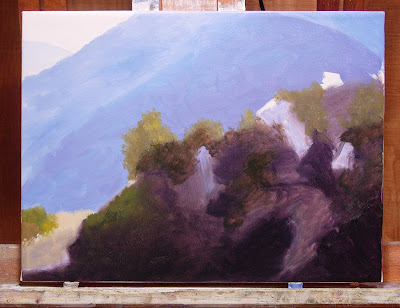 Now further defining the foreground. The darks were painted with the initial block in but put in as a thin mix of paint/turps. I'm blending my lighter greens down into the dark green mix which gives the shadow effect. Blending into the darks takes away the flat look of the darks and gives them a 2 dimensional look. 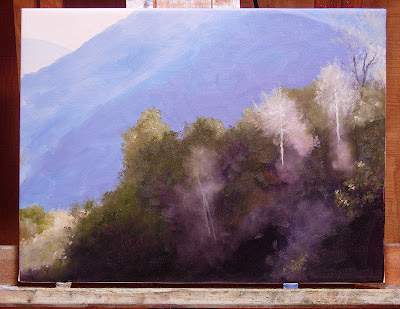 Now finishing up the foreground area and adding detail to the mountains. At this point I thought the darks were too light and went back in and put in additional darks and blended again to meet the lighter areas. This really worked much better as you'll see in the finished painting below. 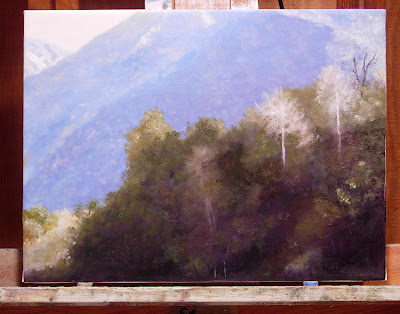 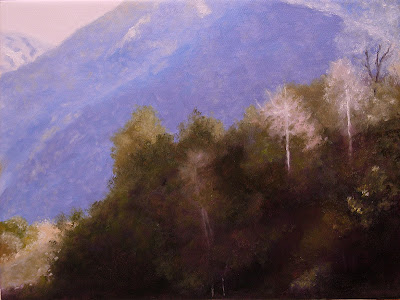 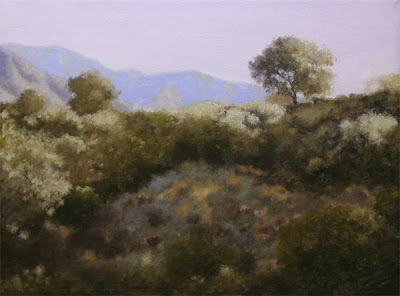 "Canyon Wall"
12"x16" Oil on canvas
I grew up in Pasadena California Which is at the foothills of the San Gabriel mountains. If you've ever seen the Tournament of Roses parade on tv on New Years day the mountains you see in the background are the San Gabriels. One of the canyons below them is called Eaton Canyon. I've hiked there many times and still go for the occasional hike when I'm in the neighborhood. This scene is of the east canyon wall in early morning light.
Posted by Ron Guthrie at 8:52 AM 2 comments: 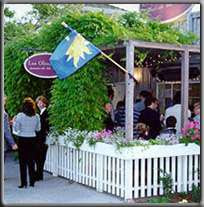 I forgot my camera...twice! Wanted to take pics of the show reception at the cafe and forgot to take it with me that night. Then, had to go back there the next morning and forgot to take it again! A mind is a terrible thing to train.
The show recption at the Los Olivos Cafe went better than hoped...not sales-wise, I mean we actually had people show up compared to other receptions there where no one shows up. I was more worried about that than selling. We put the word out to our artist friends and former customers and we had both show up...a nice little crowd but all the ones we hoped would have come and a few who were a complete surprise.
By the end of the night we had sold another painting which is a big relief from being there for a month and selling nothing. I have to tell you...the art is lit up at night and boy did it look good! All of those who came and saw it at my Studio Tour couldn't believe how different they looked with the lights on them.
The show will run all month and lots of people will see the work so that's a good thing. I was just happy we had those who came by make it to the show...all had a fun time talking and the cafe is a great place to have a show. I'll try and get pics later this month...at the moment I have moved back into Gallery Wrap frame maker for a friend which has been lots of fun.
Posted by Ron Guthrie at 10:39 AM No comments:

OK...the pics I had hoped to take came out terrible so I won't post any of those. It's taken me two weeks now to get around to typing this only because immediately following the studio tour I had to get last minute things ready to move a lot of my work into the restaraunt show in Los Olivos. You'd think I would have been ready but no way. As for the tour, in the end we sold 6 paintings. 2 Large pieces and 4 small paintings. I could have sold another small one twice but I let the prospective buyers know I wouldn't sell that one. It's an earlier piece that let me know I was making good progress in my painting so I'll keep that one as a reminder of the hard work.
The money was really good for "2 days of work" and the museum sent our check within a week. The museum got 30% but I get to write their part off as a donation to the museum. This was their best Studio Tour yet and everyone is already looking forward to next years show. We were smart to cover a wide price range...not everyone was driving shiney cars. Lets face it, art is a luxury so doing work for various budgets is a smart thing to do.
What did I learn?? Next year I'll get some brochures or free hand outs for people to take home reminding them of my art. I'll have more smaller pieces ready to go. People weren't drinking wine on Sunday so I only need to buy enough for Saturday. And...I'll try and get people to write legibly in my guest book and get at least an email address! Small mistakes but learned ones.
Posted by Ron Guthrie at 12:20 AM No comments: