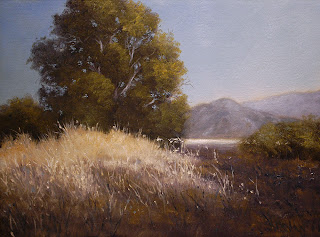 A Study...12"x16"
Still playing with light and shadow, this painting came was started to follow up some things from a previous sketch. Halfway through it though some other ideas popped into my mind and the painting changed into it's own. That was ok to do as the painting came out well enough. I like the grassy area in the foreground catching the late afternoon sunlight and the rest of the grasses in shadow. I was originally going to try painting the shadow areas with blues and purples but opted to go this way. 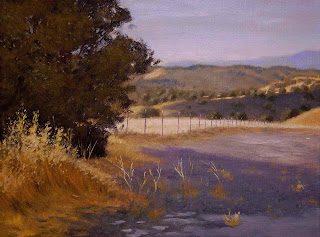 Did this painting based on a photo taken last winter overlooking Foxen Canyon. This area is just above the Firestone Winery and close to my favorite spot up there. The background hills always catch the late afternoon light really well and the grasses get it too. I like the place and enjoy just being around up there. It is taking me a while to get used to painting smaller again but I'm coming around slowly but surely, haha.
Here is a detail of the background area....Fun adding the metal fenceposts. I used the egde of the painting knife to add the wire very loosely. I like the shadowed color on the hillsides here. 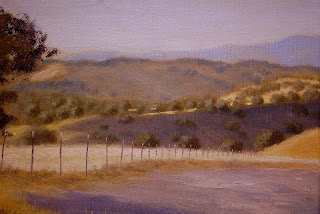 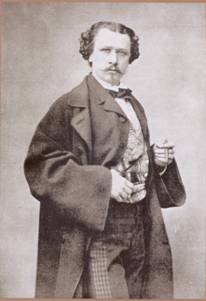 Carlos De Haes, Born in Brussels 1826 and died in Madrid 1898. I had never heard of De Haes and last night while browsing some art related subjects on youtube I bumped into a clip of his paintings. Blown away would be an understatement. De Haes was a super painter with a wonderful sense of illumination, light and technical prowess. If you'd like to see a video presentation check it out here and enjoy!

I really love his sense of light and his commanding way of painting large scenes of very simple landscape subjects. Many of his works have that muted grey look that worked well in landscapes compared to todays bright, colorful works. Those toned down paintings had an enormous amount of mood put into them simply by the use of muted color. It's very hard to find a painting with mood in it today when so much color is being used by todays painters....I'm guilty of it too but that is  the way people want it so I'm told.

I did a Google search of De Haes and found another blog that has some awesome large images of his work and also some background of the artist that makes for a good read. If you have 10 minutes do check out this mans work...it is well worth your time.
Posted by Ron Guthrie at 9:18 AM No comments: 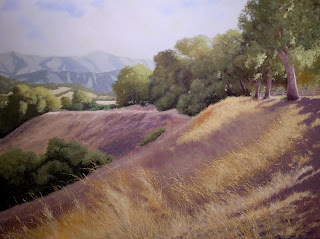 "Mission Santa Ynez Buffs"
36" X 48" Oil on Canvas
Mission Santa Ynez is located on a piece of land next to Solvang on one side and these bluffs on the other. Below the bluffs are the fields that the missionaries and Chumash Indians grew olives. It's a beautiful overlook towards the east end of the valley and a great place to sit in the shade of the pepper and sycamore trees there and wonder how many people had done the same long, long ago. Lets see if you know your mission history....did you know that the Calfiornia missions were built within a days "walk" from each other going up the coastal road which would later become Hwy 1?? Did you know that I live right next to a small creek called adobe creek and the mud from there built guess what??? Have you ever tried to dig adobe when it is hard and dry like it is in my yard???....I'm veering off the path (....and you don't want to try an dig dry adobe....ever!).
The painting looks good here but my camera loves and sucks up yellows so I had to back off the intensity here which has made my trees look a little dull unlike the rich, vibrant greens they are....sorry about that, life is always a trade off.
Posted by Ron Guthrie at 12:31 PM 2 comments:

Under the Golden Gate 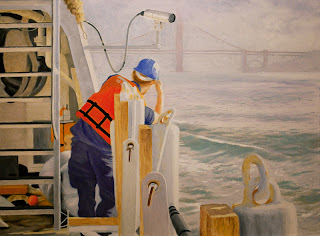 As the cutter Stratton prepared to enter the San Francisco bay the crew was busy preparing the dock lines for our arrival. To this they played Molly Hatchets "Flirtin' With Disaster" over the loudspeakers on the boat deck...a ritual of the crew when arriving in port it seems. I wasn't overly eager to tell anyone of them that song came out in 1979, the year I finished up my 3 years with the Army. It's an age thing, haha. One of the female crew members was peering over the side checking our distance to the Golden Gate bridge and I snapped a shot of her. I thought it would make a good painting portraying the combination of fog and breaking sunlight...and eager anticipation. It had been 6 months for the crew since leaving Mississippi, going through the ship trials and shakedown, cruising up the East Coast, back through the Panama canal and finally arriving here at Alameda. It was only 4 days for me and I'd be on the ship when most of them left when we arrived and leave the following morning at 0500.

The deployment was a great experience for me. I took plenty of reference photos and got to travel aboard ship with the Coast Guard on one of their newest $467 million dollar National Security Cutters. These Legend Class cutters can travel at 30+ knots and travel up to 12000 miles on a patrol. They have high tech communications, surveillance systems, improved small boat launching and retrieving, helicopter and drone handling systems...they are awesome and look it too. 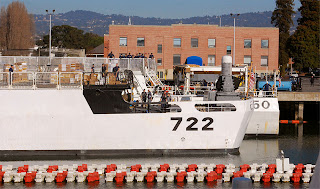 The newer ships are much larger and have the ability to carry and launch up to 3 small boats from the stern through large opening doors. The small boats simply slide out and slide back in when docking with the Stratton.
Going on deployment with the Coast Guard was truly a great ride and I appreciate the chance to have done it.
Posted by Ron Guthrie at 7:12 PM No comments:

I'm really behind on posting things on the blog lately. I've been bouncing between my landscapes and Coast Guard paintings. This is another painting that I will submit later this year to the CG. This scene was painted from reference photos during my brief time aboard the cutter Stratton. On my first night with the cutter I spent my time collecting photos from various angles dockside and some on board too. I'd have plenty of time during the next 4 days to get shots while underway.

The ship is beautiful and has awesome lines and I really couldn't have asked for better light in San Pedro for the backdrop. I have spent thousands of hours down in San Pedro over the years adding to my personal reference photos of various ships and fishing boats. This past experience made it easy to get what I wanted and so far 2 of my paintings of the Stratton have have been while she was here. 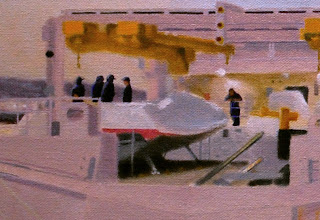 One area of painting that I am not as strong as I wish is figures. There were no crew up on deck in this scene so I added them from other reference photos. I sketched them in making sure I kept them to scale and placed them in areas of the ship that I knew the crew usually hung out at. I like this angle because you can see the cranes and the big doors on the stern of the ship that open to launch the small boats. The Stratton can carry up to 3 small boats on the stern and another boat on her starboard at about midship. The small boat you see in the detail image above was being delivered by the Stratton to one of the other cutters already in Alameda. You can also see the large hydraulic rams used to launch and retireve the boats to the right of the small boat. 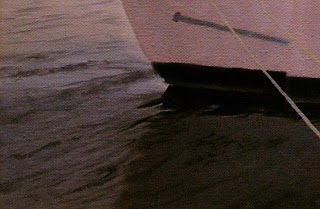 I'm really loving painting water and water in a harbor near a boat is my favorite type of water to paint. The outgoing tide made for some interesting lines as the water flowed past the ship. The late sky light and strong shadows of the ship make for great contrasting light and darks. Evening light is always the best to work with for me.
Posted by Ron Guthrie at 8:37 AM 2 comments: