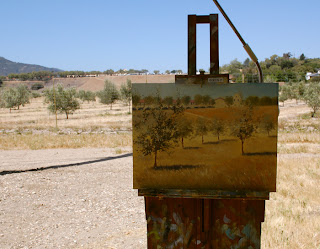 Had a lot of fun painting down at Mission Santa Inez today. I arrived around 8:30 and met up with the other 4 artists from the show at the Elverhoj Museum to paint the mission olive grove....or any other scene we wanted to do. Eventually we had about 16 or more artists painting for the day so that was a lot of fun. I was surprised that all of the green grass that was here a few weeks ago was now long gone and replaced by summer colors. I wanted green for the mission painting. You can see from above that I went with the summer colors while I was there but I think I like a painting I did this past week in the studio with green grasses. 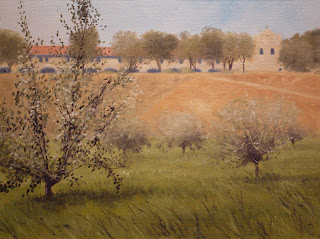 I had done another painting with green grasses from a reference photo taken a few weeks ago that was very similar to this so it was still in my mind.
Linda came down with some lunch for me so that was cool. She got to be cameraman while I painted. Lots of bugs down there landing on the painting but no biggie. I think painting later in the afternoon would have worked better since the winds kicked up and it got much cooler....plus the light is better then.
All in all we had a lot of fun but it got hot around midday. I was ready to head home by then. We all ate our lunches and joked and then headed out. Here are some pics of the day.... 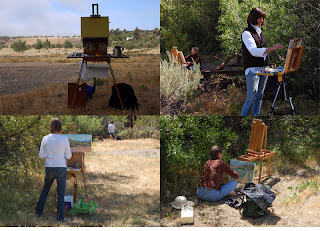 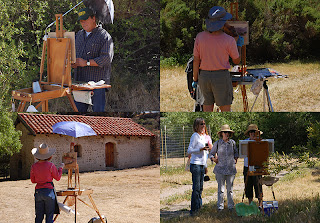 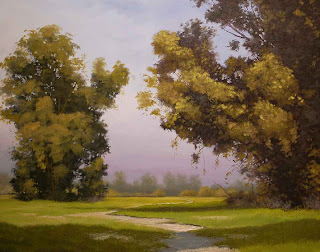 "Santa Maria Path"
16"x20" Oil on Canvas
I got the idea for painting this scene when I had to go up to Santa Maria for a physical. I'd been there before and know that the clinic is right across the way from the Santa Maria airport. There are wide expanses of fields there with large eucalyptus trees. This scene here is looking away from the parking lot of the air museum there. There is a road that crosses where the path winds into the distance behind the foreground trees but I left it out since it doesn't add to the scene, just crosses the field back there. I liked this scene for the strong contrast between the distant trees and the foreground trees. This painting was done alla prima which means in one sitting. Really fun painting.
A detail of the tree in the foreground...... 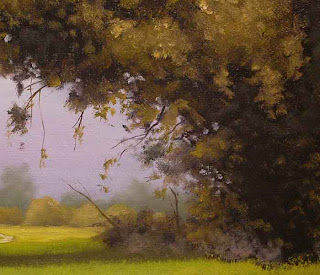 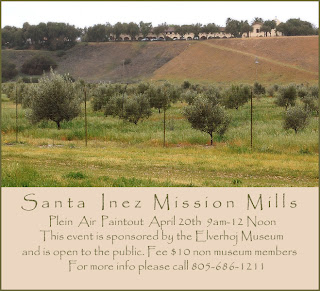 
Artists are invited to sketch, paint, make a color study or photograph the site for future work. An optional brown bag lunch and discussion will follow the Paint Out.

Artists Peggy Brierton, Ron Guthrie, Renee Kelleher and Carol Wood will be working on site and offering their support and guidance upon request. Each of these four accomplished local artists displays their diverse visions of the Santa Ynez Valley in the current Elverhoj exhibition, “The View From Here.”

The property is part of the Mission Santa Inés National Historic Landmark District and includes olive groves, an historic grist mill, a fulling mill, and the beautiful Alamo Pintado Creek corridor with the Santa Ynez Mountains as a backdrop and the Mission in the distance. “With wildflowers dotting the olive groves, this historic site is an artist’s paradise in the spring.” says Elverhoj Executive Director Esther Jacobsen Bates. “And as Aldous Huxley wrote, ‘The olive is essentially a painter’s tree.’”

The Santa Barbara Trust for Historic Preservation (SBTHP) manages the 39 acre property on behalf of the California State Parks and is in the process of developing a public use plan. The Paint Out is a collaboration between The Trust and Elverhoj.

The Mills property will be the subject of an upcoming juried art exhibition at Elverhoj. An open call for entries and exhibition specifics will be released in early summer. Interested artists can email info@elverhoj.org to be added to the list to receive a prospectus and entry form.

The Paint Out is free for Elverhoj members, $10 for non-members. Reservations can be made by phoning Elverhoj at 686-1211, or via email to info@elverhoj.org.
Posted by Ron Guthrie at 2:03 PM 3 comments:

Above is an image of a plastic model of a WW2 ship. When I was growing up I built dozens of models...the USS Franklin, Titanic, Queen Mary, P51's, P47's, P40's, B17's, B24's, B25's, Lancasters, F4F Phantoms, Sabres, the Saturn 5 rocket (a 5 ft tall model!)....not in a million years would I have ever guessed that one day one of my paintings would be displayed on board one of these ships...in real life! But low and behold, yesterday I received an email from the Coast Guard of what paintings in the collection would be displayed during the 2013 year. One of my paintings titled "Capsized" is going to be displayed aboard the USS Yorktown which is now a museum in Charleston Harbor, South Carolina from the later part of May till the early part of June in conjunction with the Spoletto Festival activities.
....And can it get any better than that? But of course! Turns out that Linda's Dad served aboard the USS Yorktown when he was in the Navy. Sometimes it is really cool being an artist.

The 4 paintings that were juried into the Coast Guard Art Collection this year will be on display at the Salmagundi Club in New York May 26 through June 14 as part of the Inaugural Exhibit.

Another painting of mine, "Surf Training", will be part of a show at the Coos Art Museum, Coos Bay Oregon,  August 2 through September 28, 2013. Yahoooooooo! 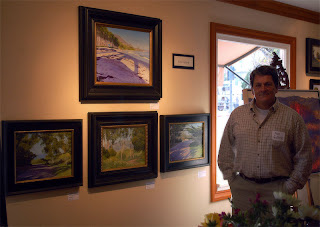 Sometimes a show reception can just go bad from the beginning! Well, not really the show reception. The show reception down in Santa Barbara was beautiful. It was held on Santa Barbara's First Thursday Art Night so that meant a lot of people would be coming to the gallery...and they did. The Divine Inspirations gallery was pretty much packed all night. As you can from above I took my camera to take a few pics but most of the shots are horrible because there were just too many people to shoot a good pic. No, what went wrong was with me.
On monday morning after hanging the show I was driving back home and could feel myself coming down with a cold. By tuesday I had chest and sinus conjestion. I wanted to cancel going to the show but it was our groups first time showing together and I was also commited to delivering a painting I had sold to a couple back in September who were going to the show. I felt horrible. When Linda and I got home I had a 103 degree temperature.
The couple showed up to take their painting. I love that painting, a desert painting I did back in August on 1x3 ft luan panel. I called it the "Song of the High Desert" since it captures the dusk lighting in California's Mojave desert not far from Lancaster and near the foothills of the San Gabriels. I was happy to finally get that painting to it's new owners. I received a wonderful email this morning about it from them so it was worth the trip and misery of being sick. The show was great and our group received lots of great compliments. I ran into artist Dan Schultz who is one of the artists from my gallery in Pasadena, Galerie Gabrie. His wife and their son were out enjoying First Thursday. It was good to see Dan again.

This is an absolutely gorgeous show by members of PACC. We hung the show on Monday morning
and the quality of work is hands down gorgeous! The 6 artists of PACC brought out some outstanding pieces of work. If you are in the Santa Barbara area please come to the artist reception on Thursday. You will really see some outstanding work. 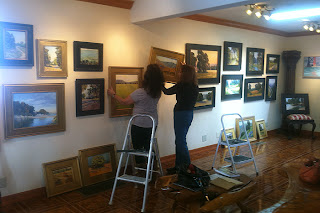 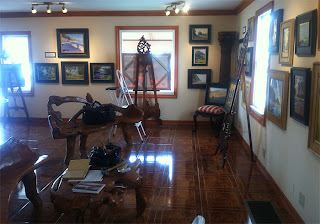 Just about ready for the show, this is a wonderful gallery in Santa Barbara.
Posted by Ron Guthrie at 11:00 PM 3 comments: