I used to hate painting vineyards...too many rows to mess with and they slow you down. Then I began to realise after painting a few that vineyard scenes usually have the things I like painting...deep shadows, great contrasts in dark/light due to the bright highlights on the tops of the grape plant and room to allow great sky work. They also offer the chance to work on atmosphere as well as give you a chance to work on painting distance into a scene.
Working on these paintings is really good practise in capturing all these elements in a painting so I've done a few of these now. I just recently finished 3 of them and thought it woul be cool to post them together to show the variations in painted vineyards. I am totally no pro at them yet, or with any other subject for that matter, but I am always trying to paint better paintings and this is the price for that...paint, paint, paint.
Here they are.......... 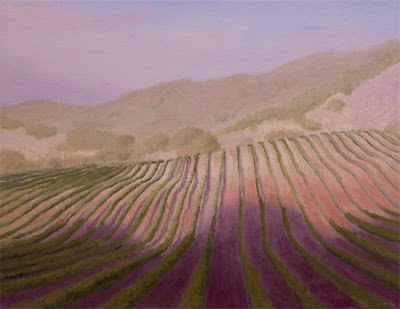 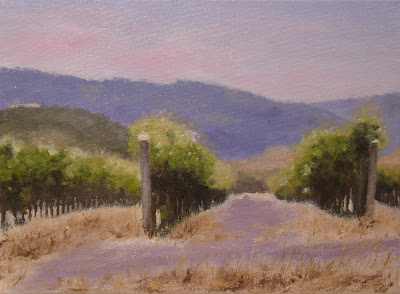 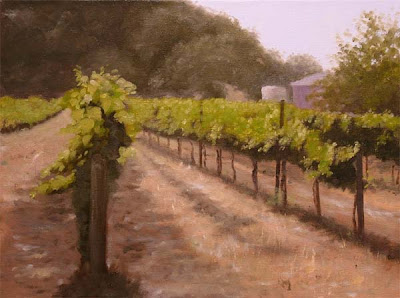 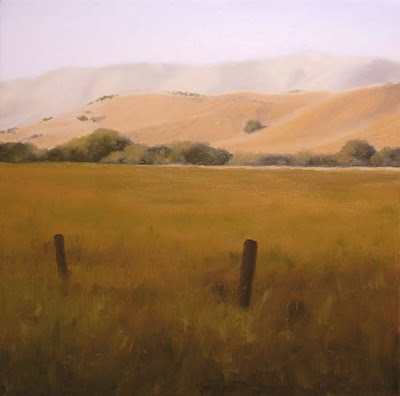 "Foxen Canyon Field"
20"x20"
Oil on Gallery Wrapped Canvas
I saw this scene one day while driving in Foxen Canyon. That pale blue sky behind the warm earth tones got to me fast and out came my camera. Back in the studio I decided to paint it on 20"x20" gallery wrapped canvas that I had made. I think it is a very cool painting. I have been striving to get grasses painted better so this was a good excercise for that. Sometimes the loose stuff is the hardest stuff to paint. I think I'll make a frame for this one.
Posted by Ron Guthrie at 7:49 PM 2 comments: 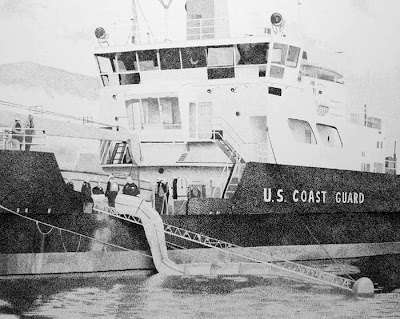 "Oil Spill Training"
16"x20" Pen & Ink - Stippling
First off, I apologise for the terrible photo of this drawing. My scanner is once again on the blink and a photo of a drawing in stippled ink is hard to get right. This drawing of a Coast Guard cutter was submitted by me for jurying into the CG collection in December and got in. Jurying was done by the Salmagundi Art Club in NY. I've already mailed it off so no chance of a decent scan now.

I wish I had allowed myself more time to do this drawing. I had to rush on it and completed it in about 4 days. I should have done it at 11"x14" but being insane I went with 16"X20". Lots of dark fill work and the hull took forever! I'm really proud it got into the collection and hope they don't file it in some dark warehouse now that they own it.
Posted by Ron Guthrie at 7:35 PM 2 comments: 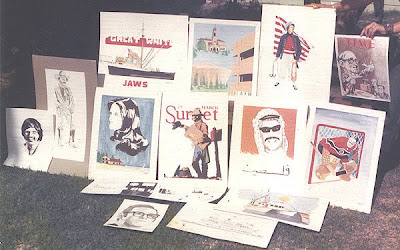 I just ran across this image I had scanned a few years ago. Blair High School in Pasadena was where I actually started my first serious work into art. This all thanks to Mr Gerald Garden and Vince Melie. After I got out of the army in 1979 I went to Pasadena City College. I took aa drawing class there and Mr Melie was my teacher there too. Mr Melie had been all around the world and had the stories to prove it. He was a very funny and kind human spirit. About 2 years after that class Mr Melie suffered a heart attach and passed away. I think of both of these teachers all the time still. Most of these images were paintings or pen & ink drawings with watercolor or tempera washes done in cartooning class in which I sat at a table and really did illustration work. Mr Garden would hand me an editiorial cartoon from the LA times and say "think you can draw this?" and that's where I learned the use of quill pens and my first ink work. I never saw a rapidograph until college. Sometimes Mr Garden would hand me the cover of a sunset magazine and I'd learn to paint using tempera. I did the tall cowboy with the rifle for my Dad for Christmas one year...the Jaws boat was inspired on monday after seeing the movie on Saturday night, (I still won't swim in the ocean!), that was done from memory because computers weren't around to let you look up anything and everything on the planet.

I remember the day we took this photo. I had brought all of my work home from that year 75-76 and my Dad and sisters friend told me to bring it out in the backyard and we'd take a photo...good thing, most of these have dissapeared over the years. I still have the Kissinger Time magazine cover...that was done in Conte Crayon. My Dad still has his cowboy. I also have a small editorial cartoon left too done in ink and stuff called Zippatone for shading...that's how they shaded cartoons back then for the newspapers. I can see these drawings and pretty much remember when I was working on most of them throughout the year. It's nice to have those memories. I'm now a "half a dollar" as my grandma once told me when I asked her how old she was. To me, taking this pic seems like yesterday. Hard to believe it was 32 years ago. Oh, for those of you who don't think illustration board doesn't last, I've got a piece of one with a cowboy holding a rifle on it that looks pretty damned good for being 32 years old!
Posted by Ron Guthrie at 7:06 PM No comments: 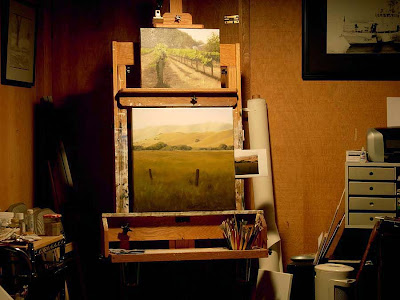 Well, just finished doing another painting and the session ran into the wee hours of the morning. I'm trying to catch up to all of the paintings I have not done due to life creeping up on me lately. I actually love to paint into the late night...things are quiet, no one else is awake to bother me and radio just gets better without all of the commercials. The painting on top was finished a few days ago and the one on the bottom took me a day to do. It would have been Alla Prima but I kept stopping to run errands in the car and go eat lunch in front of the tv to catch up on the campaign. I'm loving Alla Prima but I'm still at that stage where if I plan it it doesn't happen...something always stops me. Now I try and sneak up to it! Too this pic right before I went to bed because I wanted to see what the painting looked like when the lights were on it. It was late...or early, about 2AM. The top one is now dry enough for me to sign my name...that will be tomorrow for the bottom one. I try and do that before I move it somewhere else to finish drying because I'll forget until the day I need it for a show or something. So many things to remember.....
Posted by Ron Guthrie at 7:04 PM No comments: