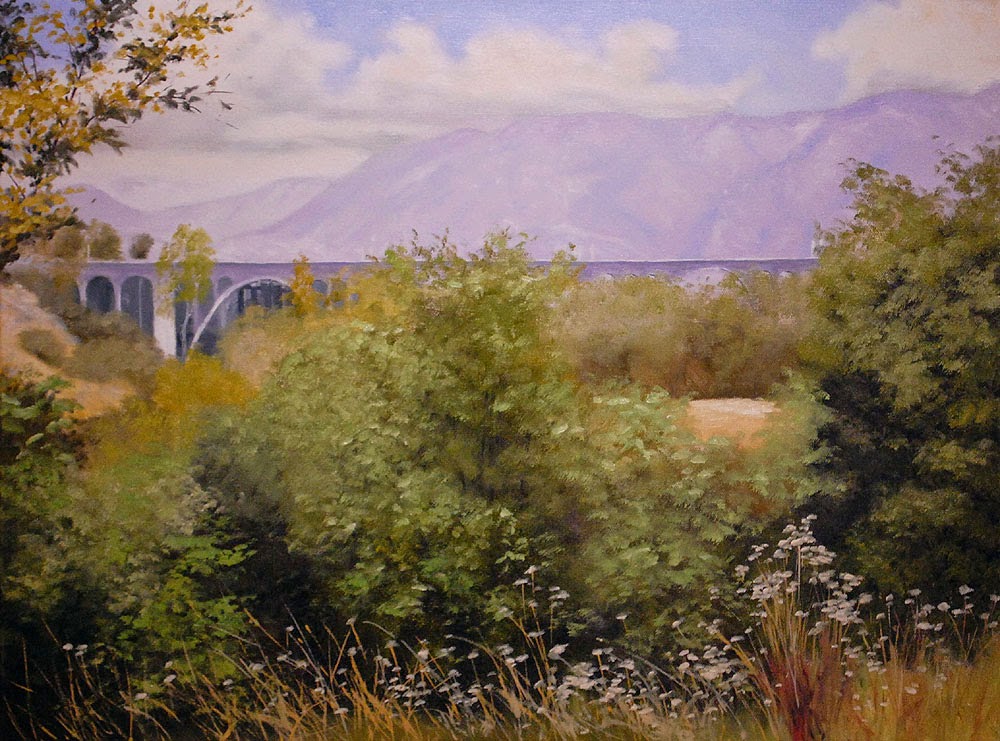 I think this is my 3rd attempt at painting the Colorado bridge spanning the Arroyo Seco in Pasadena. The first attempt was too close casuing me to get hung up in details so I just completely scrapped that one, haha. Somewhere around here is a nice landscape covering my feeble attempt. I like this view only because you can see more of the San Gabriel mountains in the background and the nice vegetation in the arroyo. The fact that it also causes the bridge to be in the distance is a not overlooked by me bonus.
Many, many painters have painted in, near or above the arroyo over the years so I feel honored to be able to paint it along with them and with decent results. If you want a foliage workout the arroyo can give it to you. I took more time to work on these treees and plants wanting not only to get better at them but to experiment and also to just enjoy myself painting them....it's funny because at first there is so much canvas to cover and it can be almost overwhelming. Enjoyment wasn't even in the picture then but it soon became that. Everyone had gone to bed, it was quiet and so I just relaxed and took my time.
When I look at this painting I think of  my Dad. He's gone now but I spent so much time as a kid being taken to these mountains to camp by my Dad...and besides, on the otherside of this bridge, about 1/4 mile, is the Rose Bowl. I played football in it in high school and also graduated there. Right next to it is Brookside Park golf course...my Dad was the golf starter there for years. My Dad also worked at another golf course, Carmilita, which is long gone but over it was built the Norton Simon museum. My Dad, Pasadena and I share a lot of things in common.
Posted by Ron Guthrie at 8:51 PM 2 comments: 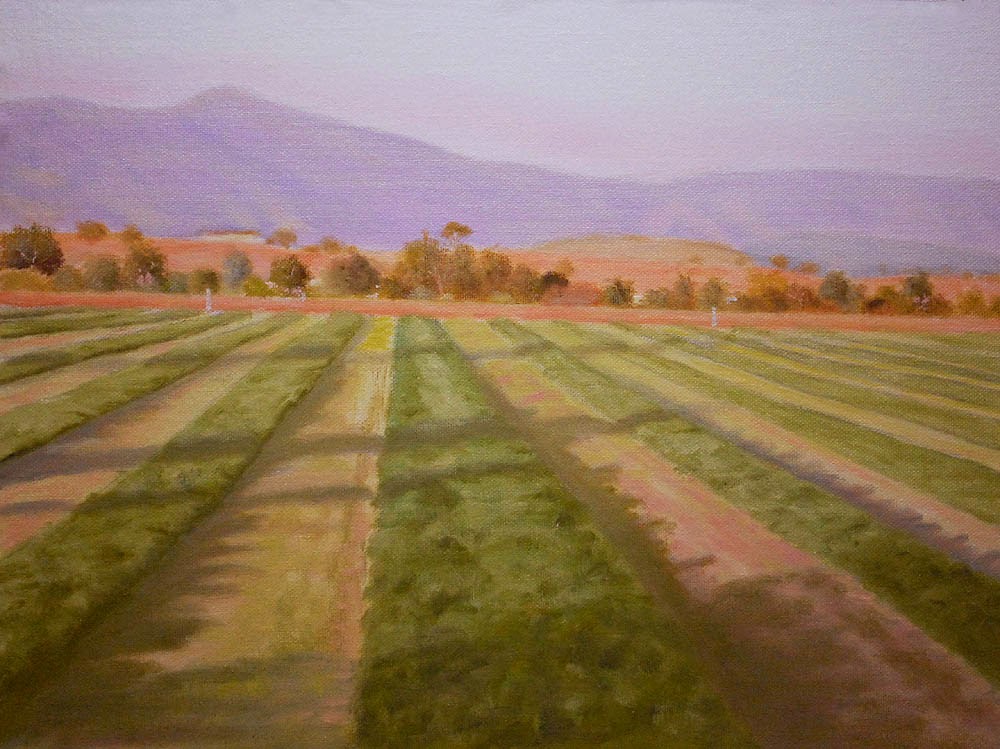 There is something about farm fields that just draw the eye in. I guess it's just the immense size and geometric patterns they can have...linear draws to the eye. This field is about 10 minutes drive over in Santa Ynez enjoying late afternoon sun...the cut alfalfa just drying away. In case you're not a farmer, they cut the alfalfa when it's ready but freshly cut alfalfa is too rich with water in it so it has to dry laying in the field in rows like this...then it's turned over to dry the other side. After that it will be scooped up by the baling machine and then stacked to further dry and store until it's sold or eaten.
I'd just like the drive the machines they use to do all of this because they look so cool. I'm sure it's hot weather doing all of this too. In Oklahoma in 1976 they payed you a nickel a bale to lift the bales onto flatbed trucks....it's all done by machine now.
Posted by Ron Guthrie at 4:17 PM 2 comments: 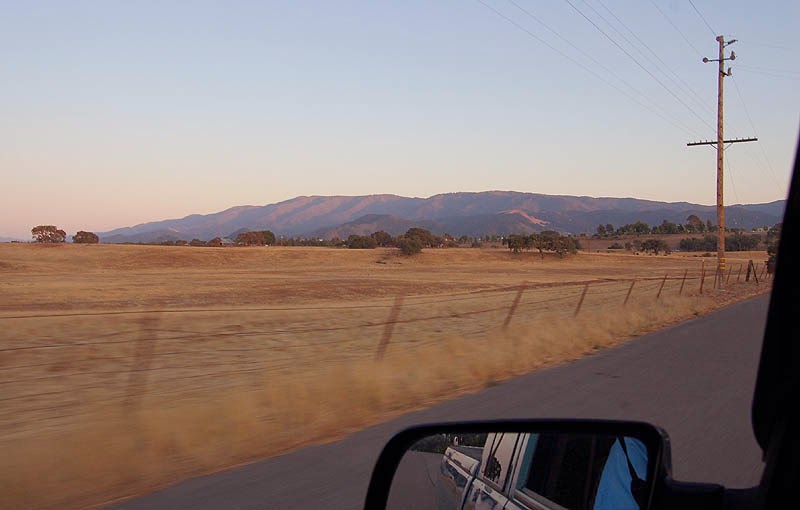 If I had about 10 sets of arms I could paint all day long paintings inspired by the area I live at, the Santa Ynez valley. Late afternoon light is the best I think and many of my paintings have come from that time of day. Seeing the bluish/purple mountains with their pink highlights from the setting sun was enough inspiration for me to paint this scene. I was driving down the road and had my camera so I took some reference photos. I didn't want the entire image, but maybe one like that will happen, so I located a nice spot in the photo and away I painted.
I am out of larger canvases at the moment so I did this one smaller at 12"x16"...should have gone larger though. Maybe I'll use this later as the study for a larger painting. 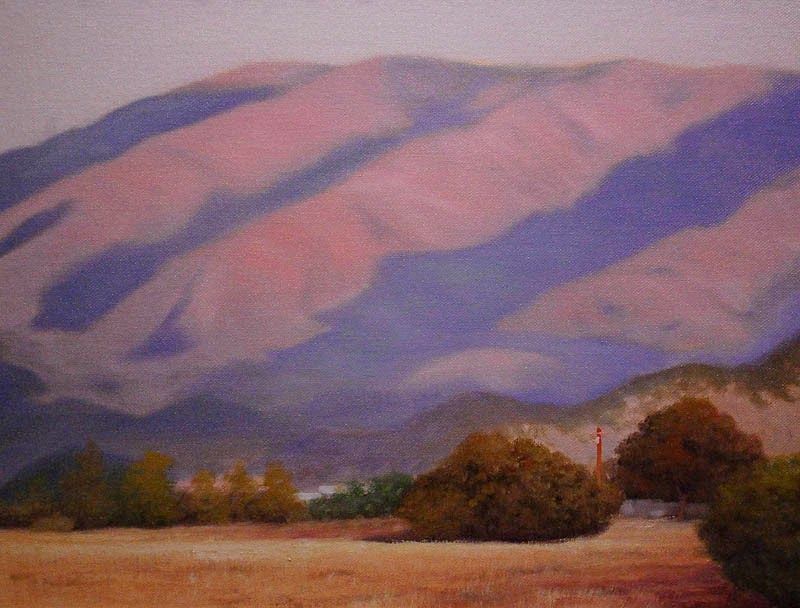 "Summer Light"
12"x16" Oil on canvas covered panel
....and a detail image from the painting: 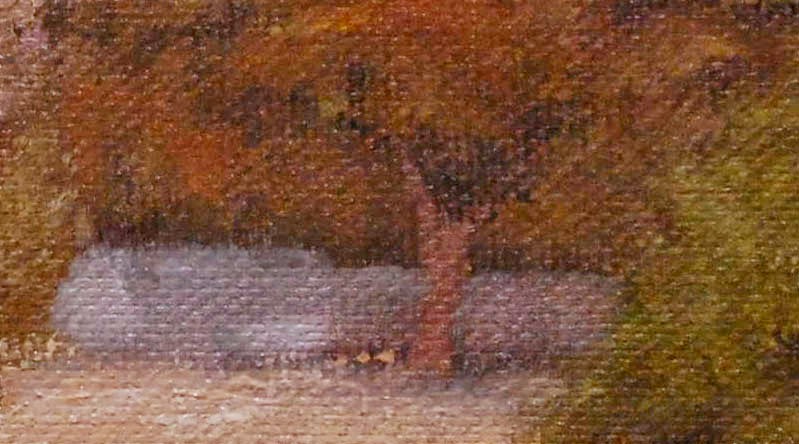