This is a floater frame for a gallery wrapped canvas. It is called a "Floater" because the frame is built larger than the canvas and then the canvas is mounted inside the frame and attached by screws to the back of the frame. This leaves a gap between the frame edges and canvas and appears to make the canvas float inside of the frame. Very cool looking!
You can buy these ready made or have them made per your dimensions if you look around online or talk to your local framer. Since my framing budget is nowhere near that of many painters whose names you know I made this one myself...it is my second floater frame I've made and came out pretty good I think.

It is made of Red Oak strips bought at Home Depot, 1"x4". I then saw it down to the size I need on a table saw. The corners are miter-cut on the table saw and then glued and nailed together...it's sanded and then rubbed with wax to protect the wood and enhance the wood grain of the oak.
Here is the procedure for those of you do-it-yourself types.

Here is the Red Oak purchased at Home Depot before cutting down to lengths to work with. Cost is about $2.50 per foot. 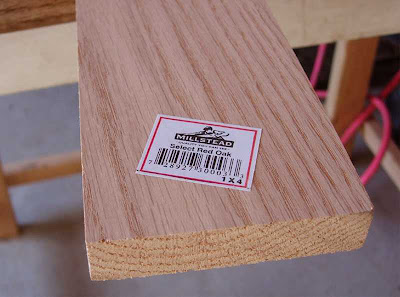 I then cut the length into 4 pieces. Then cut the width for the sides and back and then cut miter cuts where the 2 pieces will join at 90 degree angles. The miter cut is a 45 degree cut. 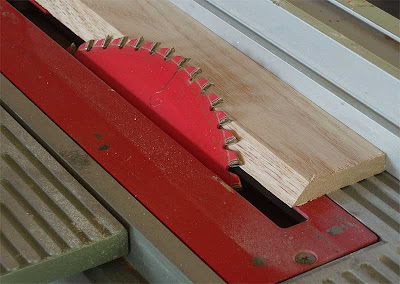 The next step is to assemble the four sides of the frame with wood glue and either small finishing nails or brads. I used brads shot with an airgun (fast!) but a hammer and finishing nails would work fine. If you used an epoxy glue you could probably skip nailing altogether. I was working alone so having this little clamp to hold the corners is great! I should have bought two though. 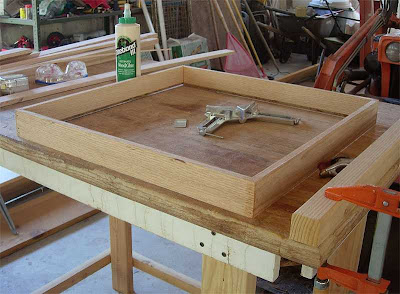 This is a crummy picture of the next step...nailing the back to the sides but you can see how the miter cut works. It gives you a nice joined edge 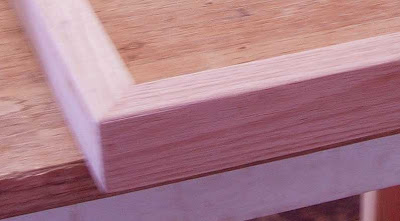 That is the basic assembly. Let it dry overnight and then sand all the sides and edges. I sand a smooth radius around the front edges and corners too. After that you wipe it down to get the sawdust off of it and then start rubbing in the wax. I used a wax with an orange oil in it to protect the wood. I love this step because now the oak really shows it's beauty. 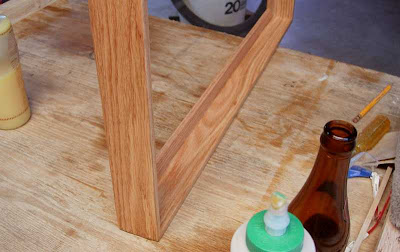 Here is the whole frame waxed up....nice! From this point you just drill holes in the back of the frame and then place your painting in there...get the sides even and then screw into the back of your strecther bars to hold it all together. 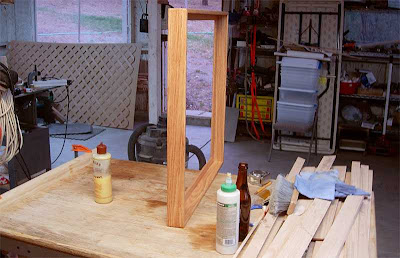 Here is the frame and painting mounted together. 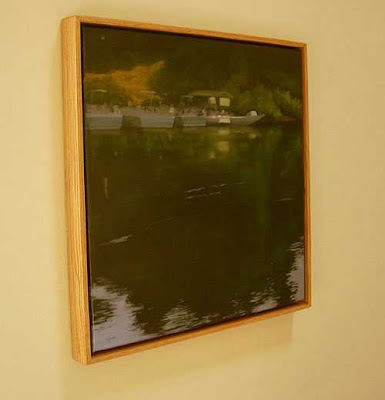 Here you can see the gap between frame and canvas. Also, the corners and edges. Notice the side nails are placed at bottom and top of frame so you can't see them. The back is nailed from behind so you can't see those nails either. 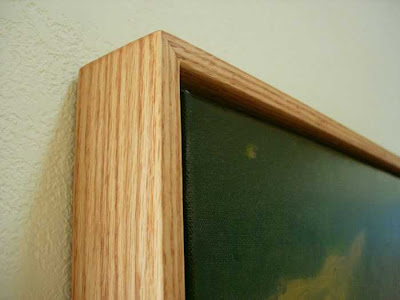 It looks like a ton of work but this second frame was much easier to build than the first...all of the figuring out was spent on that first one. I've seen versions of framing paintings where they built the frame flush with the edges of the painting and made no back at all. I've seen one like that made that was simply built of pine and then sprayed with black paint and it looked pretty cool too. Just a matter of what results you are looking for.

If you kept the edges all flat without the miter cuts and could find the wood in the correct thickness you could build this frame with just a miter box made of wood or plastic. It's just hard finding the wood in the right thickness. My wood is 3/8" thick and I started with 1" thick wood. That's why you need a table saw to do this. The table saw is also needed to cut the miter cuts. It's a fun project though....give it a try sometime. 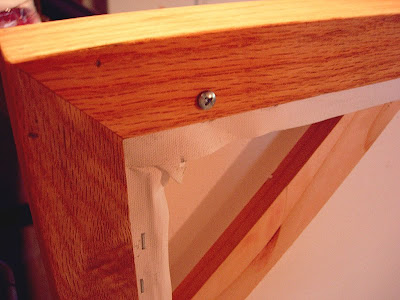 ANOTHER UPDATE....Here are some additional pics of the assembly of the frame. Again, the shape of the frame is an "L" for each side of the frame. I did a mitre cut on each piece where they are glued together forming the "L". A mitre cut is a 45 degree bevel cut (actually any degree of bevel). For additonal strength I shot 3/4" brads, which are like finishing nails, in from the back of the frame....see diagram below.

Instead of brads you can use small finishing nails. I bought an air powered brad gun, which is a lot like an electric staple gun, at Harbor Freight for about $20. I already had a compressor to run it. I'm sure they sell manual or electric brad guns too....try Home Depot. 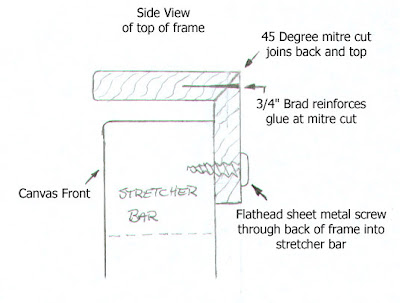 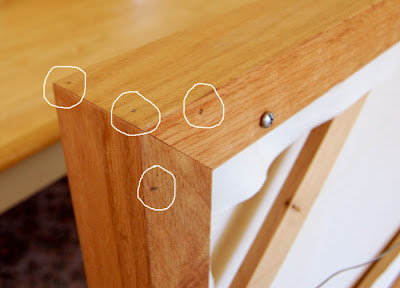 By shooting the brads from the top and back of the frame you end up with a smooth brad-free frame side like it is shown below. By using the bevelled mitre cut to join the sides and back you have a seamless joint. 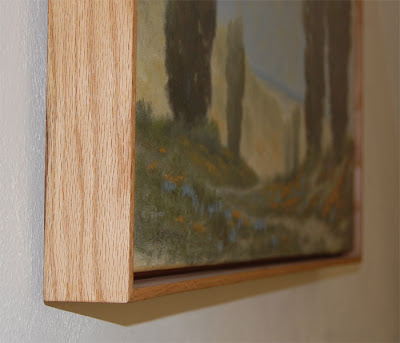 2 of my works have been juried into this show. "Eureka Boatyard" & "Motor Lifeboat". This is the 2nd show featuring the works from members of the
International Society of Marine Painters.
Show Reception - Saturday, August 16, 2008 3-6PM
I'll be at the reception in case you want to stop by and say "hi!"
Posted by Ron Guthrie at 3:39 PM 4 comments: 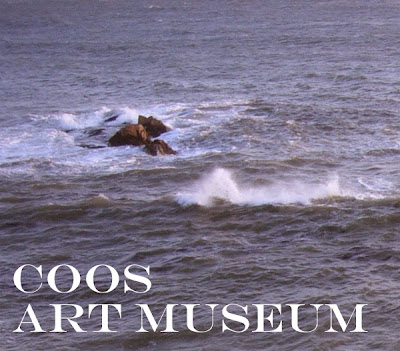 I have had my painting "Morning Boats, Rogue River" juried into the 15th Annual Maritime Art Exhibit at the Coos Art Museum in Coos Bay Oregon. Here are the details....

This painting is another in my attempts to better myself painting-wise with trals, native grasses etc. Not so much to learn on this particular one as just for the fun of it. I composed the scene as I painted it starting with the sky and working down.
This working without a ref is really a nice change and much faster than having a scene to capture. Here you just add whatever you want and make it look good. Pretty fun stuff. 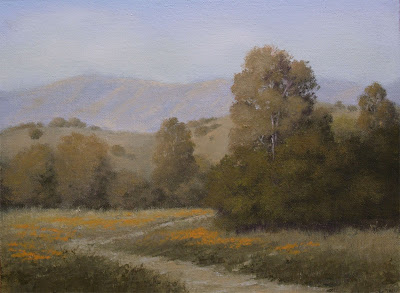 I live on a sloping part of a hill called Chalkhill. Don't ever dig here...it is mostly chaky rock and adobe...the creek close to my house is what the Spanish missionaries used to get adobe to build the Santa Ynez Mission. Don't dig here! I took a pic one day of the corner of a field where we planted a large garden last year. I was looking at it and decided to make the scene into a nocturne. First I cropped the part I wanted and then got to painting. Here is the result... 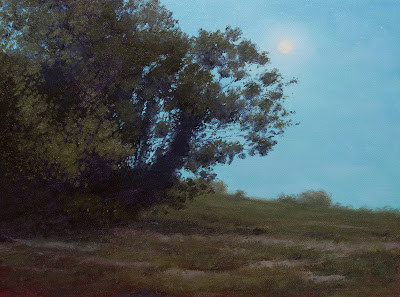 Here is the reference photo I worked from.... 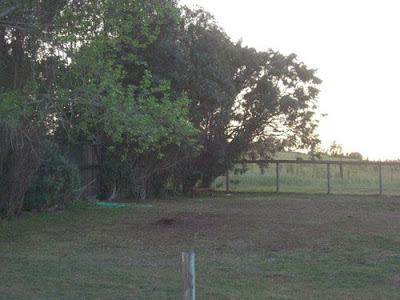 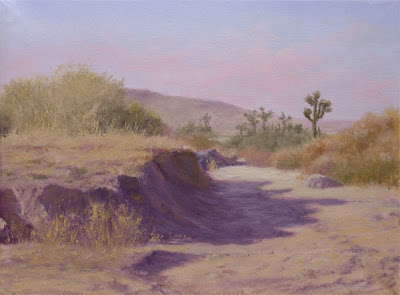 Did this one recently to add to my paintings done of the Mojave desert. It's good to paint something else besides scenes of the Central Coast of California. This is a small wash running through the desert caused by flash floods from the strong rains that come at times. It is a small 9"X12" painting.
A Detailed image of the painting...... 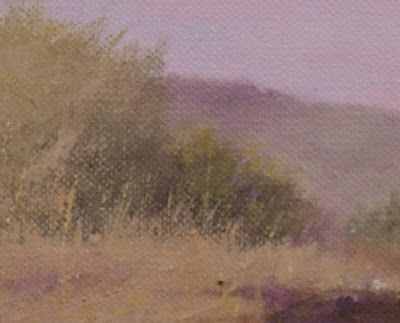 I grew up in Pasadena and lived about 3 minutes from the base of the San Gabriel Mountains. This past winter I was visiting my parents and decided to go take reference pictures at Eaton Canyon. While driving there I took pics along the way. The street that runs along the base of the mountains to Eaton Canyon is called New York Drive....a big 4 lane divided street. I decided to paint a scene along that stretch of road but leaving out all of modern civilization and paint what I feel it would have looked like before the turn of the century. I did however paint in a trail to represent where the future New York Drive would exist.....I love doing paintings like this and this is my second one with a sort of time travel feel.
Here is the road as it appears today and my reference photo to work from....

Here are some of the items to be left out of the scene which include the house on the hill, phone poles, fencing, the street, car and palm trees which were not native to California back then.... 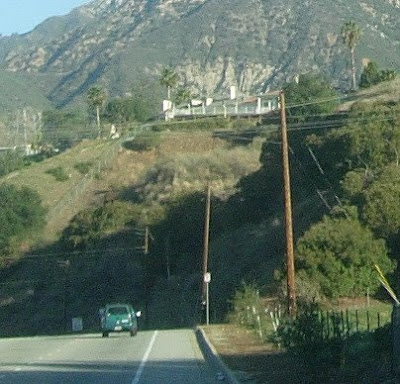 Basically, I left out all man made objects and inserted the trail to represent the future road...I figure if the road is there now then back then it was a route of travel and must have started as a trail...maybe it did maybe it didn't but since this isn't science class I'm going to go with "it did". Part of this painting is imagination, my view of how I percieve the past at this location. That grass on the right handside going into this small canyon was not there back in the 1800's. Pasadena and much of the rest of southern California was arid. Water for lawns and gardens and drinking water to support the millions of people who live there now came from up north via the California Aquaduct. The valleys below the mountains were strewn with boulders washed down from the canyons from heavy rains. I imagine the landscape in the valleys was laden with runoff ditches from the flood waters of rain and snow melt from heavy winter snows up in the San Gabriels. Pepper trees and palms were brought in by the spanish missionaries. If you look at the works by the early California Impressionsists starting around the turn of the century you can see painted records of what the land looked like around the San Gabriel and San Fernando Valleys...nothing like it looks today.

Anyway, here is my version of the scene... 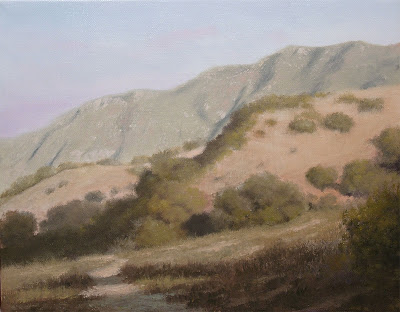 Here are some details...why? because they look cool and you can see my mistakes up close! hahahaha. 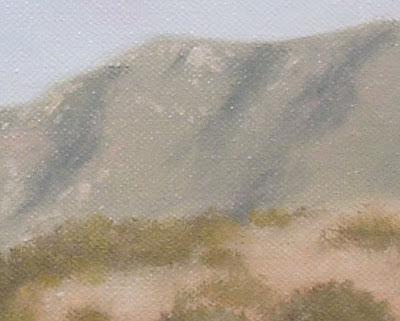 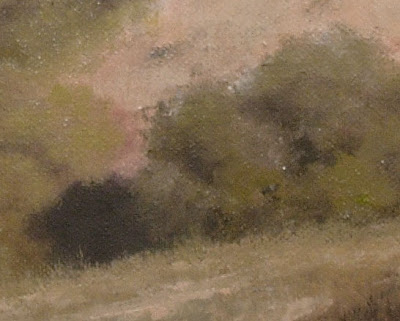